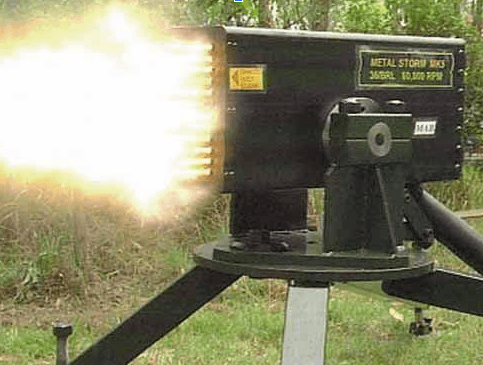 Developed by an Australian weapons company of the same name, the Metal Storm Gun was a multi-barreled volley gun capable of firing up to a million rounds per minute or 16,000 per second. The gun was able to achieve this astonishing rate of fire through its unique barrel design which allows multiple rounds to be stacked within each individual barrel – the rounds being fired through an electronic mechanism.

This design further allowed the user to select between different types of rounds to be fired – incredibly useful, especially in a rapidly evolving military and law enforcement context.

In better explaining the functionality of his weapon, its inventor, Mike O’Dwyer, used an analogy of an inkjet printer. Comparing the fired rounds to dots of ink streamed out of a printer head, he explained the weapon system as capable of delivering a wide range of ammunition combinations showcasing with varying levels of lethality.

In spite of the massive firepower that the weapon was capable of, it was not intended to deal with targets by overkill. Rather, the aim was to create a versatile weapon capable of incapacitating a variety of different threats.

Too Expensive to be Practical

While certainly an impressive weapon, its commercial prospects were doomed from the start, and it was never able to get past the prototype stage. While being able to fire a million rounds is certainly a jaw-dropping feat, it is, in practical terms, not very useful. Cheaper (and better) alternatives already existed that made use of advanced detection and aiming kits rather than a high rate of fire to quickly neutralize a variety of targets.

The relatively much more complex design of the Metal Storm gun was also a hindrance – being difficult to properly maintain and more prone to malfunction.

Eventually, the project was shelved, and the company, despite having received contracts for some of its other weapons, remained unprofitable and became insolvent in 2012.

Looking to restock your ammunition supply? We offer a wide range of quality ammunition products at the best prices. Check them out at our store.