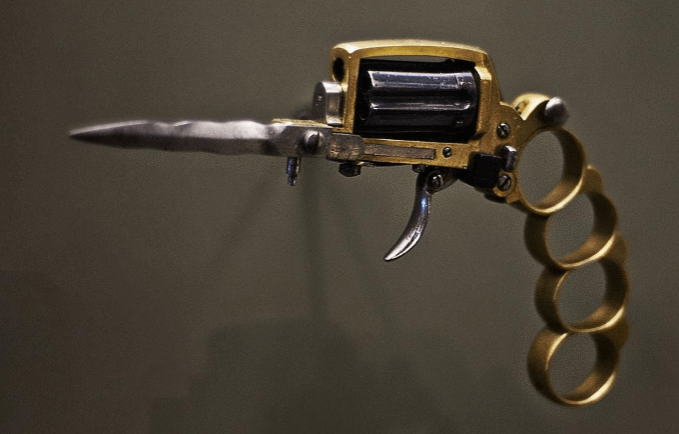 Call it a Swiss army knife of the underworld, the Apache revolver was popular with many criminal outfits in the late 1800s and early 1900s.

Guns are relatively simple pieces of equipment, composed of a barrel, a trigger, a receiver and a handle. You load a bullet in it, aim and shoot – all a fairly simple process. Despite centuries of gradual improvement, the base mechanism of a gun has remained largely the same.

However, this doesn’t mean inventors and gunsmiths didn’t get creative (or too ambitious) with tweaking the gun design. Throughout modern history, we have witnessed some truly unusual guns being invented. Some of these were truly extraordinary and ahead of their time while others were just too bizarre to merit any practical use to its wielder. In this article, we list down 15 of the most insane guns you wouldn’t believe actually existed.

Named because of its appearance resembling that of an inverted duck foot, the most unusual characteristic of the gun was that it featured four splayed barrels, each pointing at a slighting different direction. The shots were fired simultaneously on the press of the trigger. Apparently, the inventor of this gun though that the design would make the weapon ideal for use at close range to take out large groups.

However, there was just one problem with it – the gun never fired straight and as such, you were highly unlikely to hit where you were aiming the gun at, especially as the range between you and the target increased. Surprisingly, despite its obvious shortcoming, this gun quickly gained popularity with prison guards, wardens and sea captains. Perhaps, the use of it was not to hit particular targets but to fire indiscriminately and set an example of others.

‘Improving’ upon the conventional revolver, the harmonica gun featured at sliding metal loader that fed bullets into the gun’s chamber. Not only did the sliding weight make it harder to aim and fire but it was also more challenging to quickly load bullets into it in the heat of battle. In addition, the gun wielder had to be careful to precisely slide bullet in the loader next to the chamber as to overshoot it.

Not surprisingly, this insane gun didn’t enjoy much popularity and the poor souls who were tricked into buying this weapon must’ve found themselves quickly killed in duels, being busy with trying to slide the loader just right while their opponents shot them.

These were guns designed to not mimic keys in appearance but actually function like them. During the 16th century, jail doors were heavy and their locks required the use of both hands to open. This left prison guards vulnerable to attack from an opportunist prisoner looking to make their escape as the guard could not draw his gun in time. The simple answer to the problem? Make your key your gun as well.

Of course, lacking a trigger guard, its wielder had to be extra careful while holstering it, lest they accidentally shoot themselves in the leg or worse, above it.

On the surface, the StG 44 looks nothing out of the ordinary but what makes it truly distinct is that it was the world’s first mass-produced assault rifle. The invention of this gun filled the range gap between long-range rifles and close-range SMGs.

Designed in 1942, the gun was completely revolutionary for its time and was a key influence behind the creation of many modern assault rifles such as the iconic AK-47

We are unsure what is stranger, the fact that this weapon is, in fact, two guns combined into one, or the fact that the inventor of this insane gun was a practicing physician. The gun featured two barrels. The larger of the two fired .42 caliber pistol rounds. And, if that didn’t work in downing a target, you could utilize the shorter barrel to fire a load of buckshot at it.

LeMat tried to sell his peculiar revolver to the U.S Army. However, they politely turned down his offer, stating the design to be too much of an excess and the weapon being not all that reliable in field use.

Finding no success with his invention, the crazy doctor would return to his home country of France and led a legion of Americans during the Franco-Prussian War.

We can only imagine the recoil on these contraptions and since there was a lack of quality control back in the day, one accidentally blowing up their hands instead of their opponents must not have been that much of a rare occurrence.

A true all-in-one murder machine, the apache revolver could function as a gun, a knife and a brass knuckle duster. Call it a Swiss army knife of the underworld, the gun was popular with many criminal outfits in the late 1800s and early 1900s, the most famous of which was the French-based Les Apaches, from which the gun takes its current name from.

The design of the gun did grant it obvious limitations. Lacking a barrel, the gun’s effective range was very limited. In addition, lacking a trigger guard, it was unsafe to carry the gun around while it was loaded. This, of course, didn’t deter its use in the underworld as mobsters found it a convenient conceal carry to punch, stab, shoot and murder others with.

You wouldn’t download a gun …or would you? Since 2012, working gun designs that you can download and reproduce with an ordinary 3D printer have become widely available. Many of these 3D guns are designed for single use only and at best, won’t last for more than a few good shots.

However, an organization called Defense Distributed did come up with a 3D gun design that could last more than 650 shots.

If you plan on 3D printing your own gun, be sure to know that any firearm that cannot be detected by a metal detector is illegal to manufacture in the US. To safely create and own a 3D gun, you will need to insert a metal plate into the printed body so that it could be more easily detected.

Designed to be the ultimate concealment weapon, this unconventional pistol could fit inside the palm of a lady’s hand. It could fire up to ten shots simply with the person squeezing the trigger with their palm, hence the name ‘Palm-Squeezer’.

However, its stealthy nature came at a compromise to its deadliness. The tiny bullets it fired were anything but lethal. Plus, once the entire cylinder was exhausted of bullets, you had to dismantle the entire piece down just to reload. These shortcomings limited the popularity it enjoyed as a concealed weapon.

Probably the largest shotgun ever produced, this insane gun, while comical to look at, was quite effective in what it was intended for. Designed for hunting waterfowl, a single shot from this 13 feet long weapon could 50 birds resting on the water’s surface. In fact, they were so lethal in their purpose that by the 1860s, as a result of a rapid decline in stocks of wild waterfowl, many U.S states had come to ban its usage.

These guns were too big for a single person to hold and fire with. Rather, they were mounted directly onto boats used for hunting at the time called punts (hence the name punt gun), When fired, its immense recoil would often hurl the boat back a few inches.

Always fearful of their neighbor’s ambitions, many countries around Germany had built extensive fortifications at the borders that they shared with the state. Many of these fortifications were too thick for Germany’s siege guns to effectively to penetrate. The solution? Design even bigger guns!

The Krupp Gamma Mörser was the result of this thinking. Weighing in at 150 tons and featuring a 42 cm caliber, it was the largest gun ever produced until that time. This was a weapon designed to level entire fortresses. This monstrous artillery saw action in World War 1 but it soon becomes apparent that the gun was simply too big for its own good, being difficult to transport to places where it was needed. Regardless, 10 of these beasts were produced and one even saw service 3 decades later in World War 2.

After World War 1, the French pursued the same strategy of extensively fortifying its border with Germany and the Germans, in turn, pursued the same strategy of producing more massive and insane guns that could level such defenses. The result was the creation of Schwerer Gustav, a gun so gargantuan that it would feel right in place in a work of fiction. At an unbelievable 1350 tons and firing bullets heavier than a small tank, this was the largest gun ever produced in history.

Design specifically for a doomsday scenario, where civilization has collapsed and you have to make the most of what you can scavenge, the scavenger 6 is an odd-looking rifle with its most defining feature being able to fire 21 different types of bullets. What’s more, the exact 21 choices of bullets it can fire can be custom ordered based on your preferences.

In case of a zombie apocalypse or just about any other civilization-ending scenario, now you know which gun to choose to better prepare for it.

This is a gun that looks like it was taken straight out of a James Bond movie. It was certainly used by agents, however just not those of British but instead that of the Soviet Union. Nicknamed the ‘Kiss of Death’, the actual weapon may have been far less deadly than its moniker may imply. With a caliber of only 4.5 mm, this pistol wasn’t very powerful and the agent had to be in extremely close for it to have any effectiveness in injuring its target.

Another stealth gun disguised as an innocent everyday item, this time as an ordinary-looking flashlight. What is really different about the Magpul Flashlight Gun though it is actually effective weapon. This semi-automatic makes no compromise to practicality in the name of concealment, being quick to deploy and packing decent firepower. To aid in its disguise, the gun is composed of lightweight polymer rather than metal and weights the same as a normal flashlight it tries to mimic.

Designed originally for use by the Secret Service, it is unfortunate that this gun never entered production and its manufacturer had made no indication of doing so in the future.

Which of these insane guns did you find the most interesting? Tell us in the comments below. If you found the article fun to read, be sure to share it with others who would also enjoy reading it .

« 6 Useful Tips to Maintaining Your Gun
Gun Laws by U.S State – The Complete Guide 2020 »
Back to Blog