Firearm Safety for Blanks: Lessons from the "Rust" Shooting

Firearm Safety for Blanks: Lessons from the “Rust” Shooting

A firearm loaded with blanks is still a deadly weapon. These precautions can keep you safe.

This past October, a fatal accident on the filmset of the movie Rust drew attention to the dangers of filming scenes involving firearms. The details of the case, many of which are still coming to light, paint a confusing picture of inexperience, carelessness, and negligence that should have sounded warning bells to any firearm safety expert well before the incident took place. To some, it has raised concerns about how guns and ammunition are used in the movie industry, and whether they are necessary at all.

However, the reality is that blanks play an important role on the sets of movies—one that can’t be  replaced with special effects. Because blanks contain an explosive charge, they produce a muzzle flash, report, and recoil similar to firing a gun with live ammo (although the recoil is not usually as strong). This is necessary in film scenes, where actors would not otherwise be able to convincingly portray what it looks and feels like to fire a gun with recoil.

Firing blank ammunition is also common practice in police and military training, for honor guards at funerals, and even for more niche uses such as with dog training, can cannons, and golf ball launchers. In other words, since blanks aren’t going anywhere, it’s up to those handling them to follow the correct safety precautions. Here’s what you need to know.

Blanks vs. dummy vs. live rounds.

The difference between a blank cartridge and live ammo, graphic courtesy of The Times.

There are two other types of cartridges that do serve a meaningful purpose on film sets: blanks and dummies. Blank cartridges feature a distinctive crimped end or a visible seal in place of a bullet. This crimping can also be seen on the blank cartridges we carry on our site, from Triple R Munitions.

By contrast, dummy rounds are made to have the appearance of a real bullet, but without an explosive charge. However, they still usually contain several distinctive features, such as a hole drilled through the cartridge, or a crimped casing. In the absence of these features, dummy rounds can also be distinguished from real bullets by their weight and feel. Dummy round manufacturers often replace the gunpowder with a ball bearing or with BBs, which make a distinctive rattling sound when shaken. 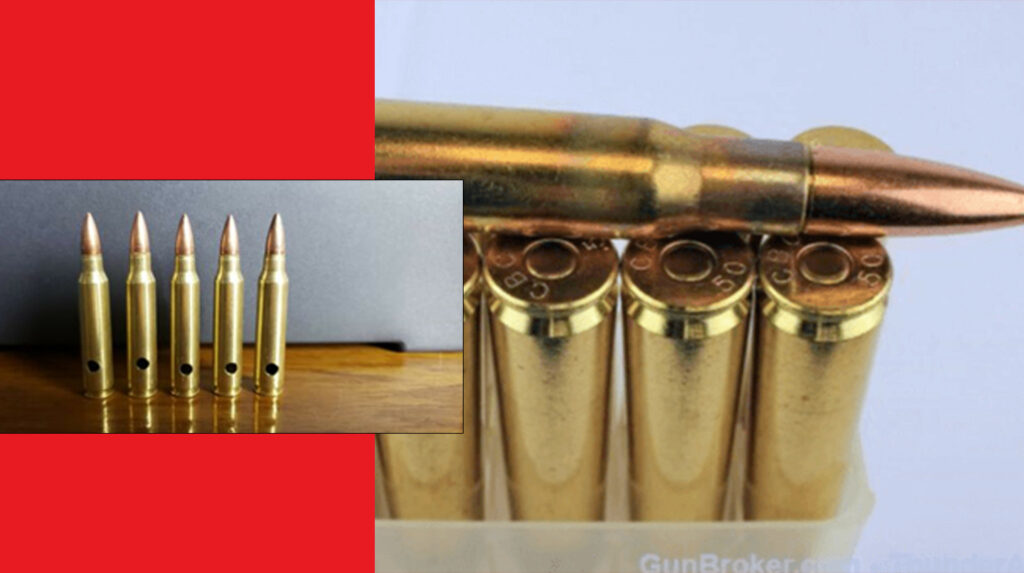 Dummy rounds, with a characteristic whole drilled in the side.

Despite the clear differences between a blank, a dummy, and a live round, firearm safety is still required on any set where firearms are present. While the round that killed Halyna Hutchins on set was a live round, both blanks and dummies have resulted in fatal accidents on film crews in the past.

In 1984, actor and model Jon-Erik Hexum was killed onset after shooting himself in the head with a prop gun loaded with blank cartridges, which he apparently believed to be safe. Most famously, actor Brandon Lee was killed on set when the projectile from an improperly manufactured dummy round became lodged inside a prop gun. Later, when the dummy round was replaced by a blank, the force of the shot dislodged the projectile and killed Lee.

Finally, there is the case of the Rust shooting, in which actor Alec Baldwin fatally shot cinematographer Halyna Hutchins and injured director Joel Souza. Baldwin was practicing drawing the revolver at the time of the shooting, having been told that the gun was “cold,” meaning it had no ammunition, when, in fact, it contained a live round.

In these cases and others, accidents happened as a result of poor firearm safety or a lack of proper precautions. To avoid accidents on set, or in any instance where blanks or dummy cartridges are being used, the following safety practices should be followed.

1. Live ammunition should be kept off set at all times.

In the age of modern computer graphics, there is no good reason to ever have a live round on set. Whatever gains in realism that can be made from using a live round are so slight, especially to most viewers, that the increased risk of introducing live rounds to the filming environment are simply not worth taking.

2. Where possible, modified firearms should be used.

Many firearms must be modified before they can shoot blank ammunition. Film crews should rely on these weapons, rather than bring unmodified firearms on set. The exception to this rule, which was unfortunately the case on Rust, is that neither rifles nor revolvers can be modified in this way.

Anyone handling a firearm should have proper safety training. With proper training, Jon-Erik Hexum might have known that a firearm loaded with blanks is still deadly, and Alec Baldwin would have known not to point a gun at another crew member.

4. Every firearm should be treated at all times as if it is loaded and deadly.

The first rule anyone who handles a gun should learn is that it should never be pointed at another person—even if they believe it is unloaded. In fact, those who handle firearms should train themselves to follow this rule even when handling a toy gun. Guns should be held pointing away from another person, and anyone handling a gun should keep their finger off the trigger unless they are prepared to shoot.

5. The armorer must have the final review of the firearm before transferring it to the actor.

According to accounts from crew members, the armorer, Hannah Gutierrez Reed, loaded the revolver on set, then left the gun in a safe while she went to have lunch. After lunch, she then gave the gun to assistant director David Halls, who incorrectly told Baldwin that the gun was “cold.” In fact, a “cold” gun is only supposed to refer to a gun that is unloaded, whereas a loaded gun (even one loaded with blanks or dummies) is “hot.”

This breach of protocol may seem minor, but if Reed had been the person to hand the firearm to Baldwin, she might have used the correct term and given him proper warning that his firearm contained cartridges.

6. In scenes that require a gun to point toward a camera, operators should CONSIDER additional protections.

Scenes where an actor points a gun directly at the camera are fairly common in film, and thousands of these such scenes are filmed every year without incident. Given the dangers of pointing a gun toward another person, however, some directors chose to take additional safety precautions. For instance, they can use bullet proof glass between the actor with the gun and the camera operators when the scene requires it, as well as using extra safety gear.

Safe use of firearms on set doesn’t require stricter rule—it requires the enforcement of rules that already exist.

None of the rules listed above are new to the film industry. The tragedy of the Rust filming is that, despite these rules existing, many of them were ignored—not just once but multiple times. It is still a mystery how a live round ended up on the film set, when no live rounds were supposed to be present. For the purposes of workplace safety, however, where the live rounds came from is beside the point, because:

Accidents happen. But accidents don’t have fatal consequences when the appropriate safety rules are followed. The movie industry is an intense environment, where directors and cinematographers can be meticulous about achieving the perfect shot even in an action scene with many moving parts. Despite this, year after year, action films involving a huge amount of firearm use are safely produced without accident. If John Wick can fire off over 300 shots in a single film without incident, other film crews can as well.

For the rest of us, the rules of firearm safety remain the same. Whether you’re out hunting or at the shooting range, you should always treat your firearm with the respect and care a deadly weapon deserves.