How the Chinese Invasion of Taiwan Impacts U.S. Supply Chains

How the Chinese Invasion of Taiwan Impacts U.S. Supply Chains 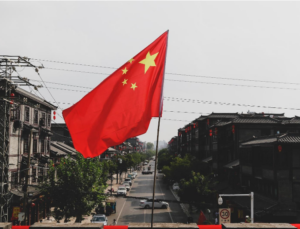 Did you know that Taiwan has been considered separate from China since 1949? However, Beijing still sees the region as a part of its territory. The relations between Taiwan and China have worsened during the past few decades, and they are at a boiling point now. Beijing has sworn to unite Taiwan with China, and they will go through all means, such as force to get what they want.

If China invades Taiwan, it will disrupt U.S. supply networks for things like metal and ammunition. One of the major reasons behind this is that Chinese military drills in the proximity of Taiwan threaten to interrupt one of the world’s largest shipping routes. Let’s take a deeper look at the China-Taiwan invasion supply chain impact, including additional details about China-Taiwan relations.

Where It All Started

In the 1950s, conflicts between the ROC (Republic of China) and the PRC (People’s Republic of China) over key islands in the Taiwan Strait led to military confrontation. The PRC bombarded islands governed by the ROC twice in the 1950s. In response, the U.S. aggressively supported the ROC by interfering.

Later on, China emphasized the Shanghai Communique, making it clear that the PRC (People’s Republic of China) is the sole legal authority of China and that Taiwan is a part of China. They also stated that the liberation of Taiwan is a domestic matter between Taiwan and China alone, where no foreign nation has the authority to intervene.

The U.S. stated that its intentions were not to pursue a lengthy strategy of weapons sales to Taiwan and that any future arms deals to the archipelago would not rise above the rate of those made in the years following the improving diplomatic relations between China and the U.S., either in terms of quality or quantity.

Taiwan, is an archipelago located between the Philippines and Japan. According to the PRC, Taiwan should be reunited with China, as they consider Taiwan a traitor.

Since 2016, after Taiwan President Tsai Ing-wen’s victory, China-Taiwan relations have worsened.  The Taiwanese president has abandoned a strategy introduced by the former president, which was targeted toward creating better connections throughout the Taiwan Strait.

China flew 56 raids on one day on the fourth of October in 2021, nearly tripling its 2020 total of 950 raids above Taiwan’s air defense identification zone. Moreover, in March, the Chinese navy sent its most powerful aircraft carrier, Shandong, over Taiwan.

The aircraft flew through the Taiwan Strait as a demonstration of force, only moments ahead of U.S. President Joe Biden’s conversation with the Chinese president to address the Russia Ukraine war.

Beijing’s attitude towards Taiwan has become increasingly hostile as they have deployed flying fighter planes near the island’s borders. According to some experts, China might invade Taiwan, which may then cause a war between China and the U.S.

Taiwan’s comparative advantages over the mainland in these areas may be threatened if China grows more powerful and gains more significance nationally and internationally. The strategic balance may eventually tip in China, maybe before the decade’s end.

China is committed to preventing Taiwanese sovereignty and potentially bringing Taiwan under its control. Beijing has never abandoned using military power against Taiwan, even though Chinese authorities frequently stress their desire to settle disputes across the Taiwan Strait amicably.

The One China concept, which states that Taiwan and the mainland are parts of China and that China’s sovereignty and territorial integrity cannot be divided, continues to be the foundation of Chinese policy.

Furthermore, as the situation in Ukraine and Russia continues, discussions regarding the insights the Chinese leaders could be learning from it and what it implies for Chinese military concerns regarding Taiwan have erupted.

Why Is China So Eager To Gain Control Of Taiwan?

China believes Taiwan to be a piece of its territory and wants to reclaim authority, which is one of the main reasons it is so eager to take control of the island. Furthermore, despite invading and occupying Taiwan, China may achieve even greater success despite having one of the world’s fastest expanding economies.

The whole world depends on Taiwan for semiconductor chips. Semiconductors are essential building blocks for modern electrical devices, including weapons, automobile breaking sensors, computers, and cellphones. Chips are produced by a vast network of organizations, including those that develop or manufacture them and provide the tools, resources, and equipment needed to produce them.

By gaining control of Taiwan, China will have control over SMC (Taiwan Semiconductor Manufacturing Company, Limited), the biggest global semiconductor manufacturer. The importance of this manufacturer can be seen by its giant clients such as Qualcomm, Nvidia, and Apple.

According to TrendForce statistics, TSMC earned approximately 54% of all semiconductor revenue worldwide in the previous year.

What Will Be The China Taiwan Invasion Supply Chain Impact?

According to the analysis by RAND, a year-long conflict between China and Taiwan would drastically reduce America’s GDP by 5 to 10 percent. Moreover, it would significantly reduce China’s gross domestic product by 25 to 35 percent.

In 2020, organizations in Taiwan were in charge of more than 60 percent of the profits made by semiconductor contract makers worldwide. Additionally, according to figures cited by Bloomberg, 88% of the highest capacity ships in the world and 50% of the globe’s container ships went through the Taiwan Strait this year.

Given tensions across the Taiwan Strait, Taiwan is still considered the top contract maker of semiconductor chips worldwide. Most devices contain these chips, including computers, cellphones, automobiles, and even artificial intelligence-powered advanced weapons.

Ninety percent of the semiconductor-grade pure neon gas utilized by the United States chip industry was provided by a small number of Ukrainian companies before the start of the Russia Ukraine war. The war caused a rush across chipmakers to find substitute supplies.

Although, following Russia’s attack in 2014, the major global semiconductor producers have been prepared for a similar disruption by effectively broadening their supply and increasing stocks.

However, even after countless efforts to develop chips on their own, the magnitude of Taiwan’s market control was unachievable. Therefore, the China Taiwan invasion supply chain impact will be significant as no amount of planning could properly shield the world economy from the effects of a possible invasion and the suspension of its chip manufacturing industry.

Even though the United States currently relies on commercial chips sourced through Taiwan for most of its defense systems like radars and modern fighter planes, the United States has retained some degree of autonomy on semiconductors for application in weapons technology.

If a China-Taiwan invasion occurs, disruptions in Taiwan-based manufacturing facilities might lead to major shortfalls for the U.S. military’s industrial sector. These disruptions will negatively impact national defense and the battlefield efficiency of the U.S. military forces.

According to analysts, the U.S. reliance on Taiwan-based chip manufacturers increases its incentive to shield Taiwan against a Chinese invasion. Biden has worked towards improving the U.S. semiconductor sector since he knows how much the country depends solely on a single firm for essential chips.

In 2022, Congress enacted a comprehensive 280 billion dollar measure to accomplish this goal. Even though China depends on Taiwan to get the essential chips, they are less dependent on Taiwan when compared to the U.S.

Moreover, Beijing is making efforts to grow its sector, especially because of Washington’s pressure on TSMC to cease doing business with Chinese firms like Huawei, a major Chinese telecoms company that Washington fears Beijing may exploit for spying.

How Will A Global Chip Shortage Impact Arm Dealers?

One of the key commercial routes for ships transporting goods between prominent economies like China, South Korea, Japan, and the entire globe is the 110-mile-wide highway, also referred to as the Taiwan Strait, which separates the archipelago of Taiwan from Asia.

If there is a problem with the trading channels, the Taiwanese semiconductor sector might worsen the worldwide chip shortage that was first caused due to the Covid 19 pandemic. These chips are crucial parts of practically all contemporary electrical devices. Furthermore, the United States depends on Taiwanese manufacturers of processors for defense systems in more ways than one.

How does The Chinese Invasion Of Taiwan Impact Supply Chain Of Different Industries?

A Goldman Sachs investigation found that the global chip shortage has already impacted 169 different industries. It is not just limited to electronics now, as it has also impacted the manufacturing of soap, steel, and concrete.

Over 60% of the world’s metal, mineral, and ore production comes from China. We do not foresee any potential sanctions against Chinese companies in a crisis. However, a choked South China Sea might extend the delivery time.

Additionally, China is extremely dependent on Middle Eastern oil. The Chinese supply route in the China Sea, which is the backbone of the Chinese economy, may be stopped by global leaders in the rare case of an invasion. If this happens, the lead times for all completed, semi-finished, and raw materials now received from Asian Countries would be drastically increased. This will result in price hikes and job losses and bring about many more unfortunate circumstances.

According to reports, cell phones will become more expensive. A tech analyst has previously expressed concern that Apple would boost the cost of the new iPhone 14 by approximately a hundred dollars. He stated that because of rising expenses throughout the supply chain, Apple needs to pass these costs on to the customer during this launch to ensure their profits aren’t affected.

According to research by Counterpoint, nearly 90% of smartphone companies, apart from Apple, were impacted by the worldwide chip shortage during the COVID 19 crisis.

Only 70% of the essential materials were provided to the makers of mobile phones in 2021. According to Counterpoint, Samsung, Xiaomi, and Oppo were more negatively impacted than Apple. Therefore, if China invades Taiwan, the mobile phone industry will also be affected, and costs will increase significantly.

Is There Any Diplomatic Solution To The China-Taiwan Crisis?

We know how war affects the supply chain and the global economy. The conflict between Russia and Ukraine is a prime example of how devastating war can be to the world economy. Therefore, all global economies must work to strengthen ties between China and Taiwan. The best approach to defuse the situation is for China to make a concerted effort to avoid escalating the conflict.

The best approach for China to do this is to embrace the initiative of former president Ma Ying-jeou to foster closer ties across the Taiwan Strait. Beijing must also cease threatening Taiwan with force and give up its desire to reunite Taiwan with China.

It is difficult to calculate the economic destruction a Chinese invasion of Taiwan would cause and the social and political turmoil it would induce. However, evidence suggests that a China Taiwan invasion supply chain impact will include disrupting the metals and ammunition supply chain.

In a situation where international security is becoming more unpredictable, cooperation on concerns of tactical survivability in supply chains is necessary as U.S. and ally governments seek strategies to protect their businesses from the effects of this future war.

If you want to keep yourself updated about the China-Taiwan invasion and other important news of the world, stay connected with our website, Detroit ammo. We specialize in selling ammo and other essential firearm-related accessories. So, while you’re at it, don’t forget to check out our latest collection of firearm accessories.

For further information, contact us at 734-250-9296 or email at [email protected], and our customer representatives will get in touch with you as soon as possible.