How to Build Your Own AR 15 – The Ultimate Guide 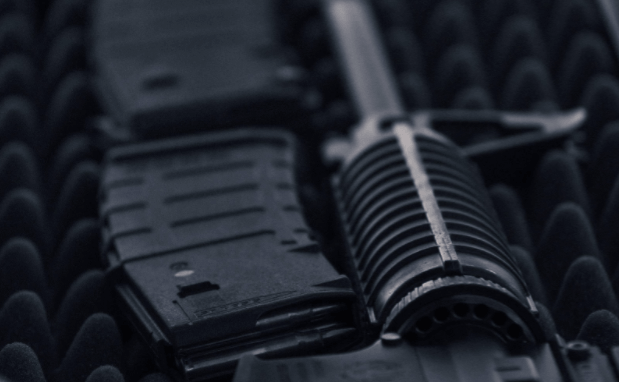 How to Build Your Own AR 15 – The Ultimate Guide

Since its inception in the late 1950s, the AR-15 rifle has gone on to become one of America’s most iconic and popular firearms. While there are plenty of amazing factory models (Best AR-style rifles) you can purchase from the gun store, nothing can compare with the rewarding experience of building your own custom version. Plus, you probably could save end up a lot of money this way versus buying a pre-built one from the market.

Of course, the process itself isn’t all that straightforward and easy, and there is a learning curve involved but, with a bit of guidance, can be performed by any Joe. This article will serve as your guide on how to build your own AR-15 at home

Step 5: Working on the Lower Assembly

Is Building Your Own AR-15 Legal?

Does a Homemade AR-15 Need a Serial Number?

How Many AR-15 Rifles Can I Build?

An AR-15 mainly consists of two parts – the upper receiver and the lower receiver. You can buy both of them from the market at various stages of construction, from a complete pre-built assembly to a bare-bone ‘stripped’ version. Generally, the various components that make up a fully assembled upper and lower are as followed:

The barrel is among the most important component that will make up your AR-15 build. It will determine what rounds your rifle can shoot as well as how good its performance would be when fired. Generally, when choosing a barrel for your AR-15, there are four main factors you should take into account, which are:

A barrel can be lined with chrome, melonite, or none at all. Chrome-lining helps increase barrel life while melonite helps improve accuracy.

Length is a compromise between a gun’s maneuverability and its optimal shooting velocity. For most AR-15 built, a standard 16” would suffice.

This refers to the frequency at which one entire rotation is completed by the barrel’s rifling. On the majority of AR-15 barrel, it can range from 1:12 to 1:7 (one rotation per 12 to 7 inches). For most builds, we recommended going with the latter.

Stripped upper receivers for AR-15 come in all shapes and dimensions, but in terms of functionality, they are completely the same and should be compatible with virtually all AR-15 components. However, if you are opting to build an AR-15 in a non-standard caliber (any other than 5.56 or .233), this will obviously not apply for certain components, and you will have to do your separate research on which ones are and are not accepted.

Regardless, for a standard A5-15 build, it would ultimately be a matter of preference regarding which upper receiver you select. Some of the most popular designs are introduced below.

The most popular option on the market. It features a traditional Picatinny rail allowing you to mount virtually any sight or optic you desire

Comes integrated with a carry handle and a rear sight. A great option if you plan on a build a rifle closest to a ‘mil-spec’ M4 original.

A bare-bare, simple receiver, featuring neither a forward assist nor a dust cover. Nonetheless, it is the most affordable option and also great if you want to keep your rifle lightweight.

The gas system of the rifle will dictate how it cycles and feeds ammunition. Virtually all AR-15 gas systems operate on a direct impingement mechanism which is illustrated below.

Choosing a gas system will ultimately depend on the length of your selected barrel, as recommended in the chart below.

There are mainly two types of handguards you can find on the market – drop-in and free-float. The former helps with accuracy by reducing stress on the barrel while the former provides a more secure fit. Most handguards feature a rail interface, allowing you to attach various gun accessories to them. However, options are available that come without them, providing a more ergonomic, comfortable grip.

Regardless of the type of handguard you opt for, make sure that it is designed specifically for your rifle’s gas system. A handguard that is too short will leave the gas tube and gas block exposed.

A bolt carrier group is a component responsible for making your AR-15 go ptt ptt ptt ptt when the trigger is pulled. A charging handle is what loads and cocks the rifle. Both of these come pretty universal, and picking just any model from a reliable manufacturer would do just fine.

Working with a stripped lower receiver would have been easier if it weren’t for the stricter regulations surrounding it. A better option for building a custom AR-15 is to go for an 80% lower receiver. Of course, some machining and drilling might be required to make it ready to accept a lower parts kit, but the process is not that difficult.

However, if you are a resident of the following states: Washington, New Jersey, New York, California, and Connecticut, you will need to be mindful of additional restrictions when it comes to the purchase of a lower receiver.

For a standard A5-15 build chambered in 5.56 or .233, you can pick any lower parts kit on the market as they are universally compatible. Any AR-15 lower parts kit must include the following items: 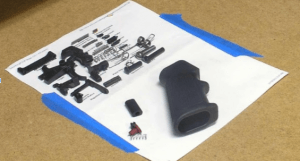 The buffer assembly allows for a smoother operation of your AR-15 rifle and forms part of its recoil management system. A buffer assembly is mainly composed of four parts – buffer, buffer tube, and spring.

Buffer assembly items for AR-15 builds come mainly in two versions – commercial/standard (1.17” OD housing) and mil-spec (1.14” OD housing). Your lower receiver should have information on it regarding which of the either two it is compatible with.

Similar to the case of the buffer assembly, buttstocks either come standard or mil-spec and, thus, you should take care to select one that is compatible. When it comes to design, there are countless variations you can choose from for your AR-15 build. However, virtually all can be grouped in the following two categories.

The main reason to buy an adjustable buttstock is its versatility. It allows the shooter to adjust the rifle’s length of pull to fit their body as well as helps make it easier to transport and safely store the firearm. It can also aid with a rifle’s maneuverability in tight spaces.

The main reason to buy a fixed buttstock is its reliability. Compared to an adjustable buttstock, a fixed one is far more durable. In addition, for precision shooting, it tends to be the better option since it provides the shooter with a more solid point of contact for the butt of the rifle and keeping vibrations to a minimum.

Aside from the standard hammer, screwdriver set, and eye and hand protection, you will need the following tools for the construction of your AR-15 rifle.

To secure the roll pins that came with the parts kits in your assembly, you will need a roll pin punch set. Fortunately, these sets come very cheap and can be purchase from Amazon for under $13.

For the installation of your buffer assembly, handguard, barrel, and more, buying an armorer’s wrench might be extremely useful and save you a lot of headaches.

Trying to work on your AR-15 parts without a means to properly secure them would be quite foolish. Be sure to acquire a good set of vices and clamps for the task.

Building your own AR-15 can certainly be a messy process. Be sure to have a quality cleaning kit at hand to properly clean your rifle without scratching it as well as better lubricate all its nooks and crannies.

All those nuts and bolts in the assembly would need tightening, so investing in a quality Allen wrench set might be worthwhile.

Now that you have all the parts and tools required for your AR-15 rifle, it is time to start building. Have all the items arranged in their respective assemblies and be sure to also have a detailed AR-15 schematic at hand for identification purposes. Midway USA provides an excellent diagram that can be accessed through this link.

Depending on the stage of construction of your upper and lower receivers, you might be able to skip some of these steps.

Use a roll pin punch to secure it further. Test it to see if it operates properly, and then, move on to working on the ejection port.

Finally, while keeping hold of the spring’s tension, push the pin all the way through until the snap ring stops you. If installed correctly, the ejection port should snap shut when you let go of the spring.

Screw the outer receiver nut onto these threads until it hits the ejection port cover pin and then slightly unscrew it for one full rotation.

Now take the inner barrel retainer nut, and, using a wrench, tightly secure it under the outer receiver nut. Use a torque wrench to make sure that the gas holes remain aligned.

Step 5: Working on the Lower Assembly

Afterward, use a roll pinch punch to push the button in as much as it allows. Start threading the magazine catch until the end of the thread portion is flush with the button.

To assemble the bolt catch, start by putting the spring in the plunger and afterward, insert it into the hole above the magazine catch and then place the bolt catch. Secure the setup in place with a roll pin.

Now take the hammer and loop over hammer spring over the studs on its sides with the open end facing the front. Place the trigger assembly in the lower from the above cavity. Replace the slave pin and secure the setup in place using a roll pin.

Finally, position the hammer in the front end of the lower above the magazine catch so that the legs of the spring rest on the pin holding in the trigger. Lock it into place by securing it with a pin inserted in the top hole on the receiver.

In a large hole on the left side of the receiver, insert the rear takedown pin. Now insert the detent and the detent spring into a small hole on the rear side of the receiver. Slide the end plate forward to compress the spring into the hole and reverse-thread the castle nut forward until it firmly secures the end plate in place. Tighten it further using a wrench.

Finally, insert the buffer spring into the buffer tube with the buffer end facing out and then slide in the buttstock. Adjust the length and tap it in.

Disengage the takedown pins on the lower receiver and gently position the upper receiver over it. First, align the front takedown holes on the lower and upper and engage the pin to lock them in place. Afterward, simply engage the rear takedown as well. Congratulations, you have finished building your own AR-15 rifle!

Double check if every part is working properly. Attach your desired accessories and take the rifle out to the range for shooting. 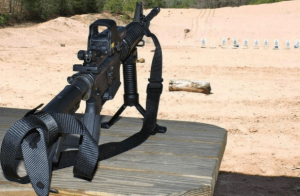 Is Building Your Own AR-15 Legal?

Yes, it’s completely legal, and, as long as you are making use of an 80% lower receiver, in most jurisdictions, neither serialization nor registration would be required.

Does a Homemade AR-15 Need a Serial Number?

Currently, there seems to be no federal law in place that requires you to mark your homemade AR-15 with a serial number. However, local state laws might differ, so make sure to check them out just to be on the safe side.

How Many AR-15 Rifles Can I Build?

This is America, built as many as you want! However, if you are building them with a clear intent to sell them and making a profit, you will need a license.