How to Choose the Best Bullet Weight – The Ultimate Guide 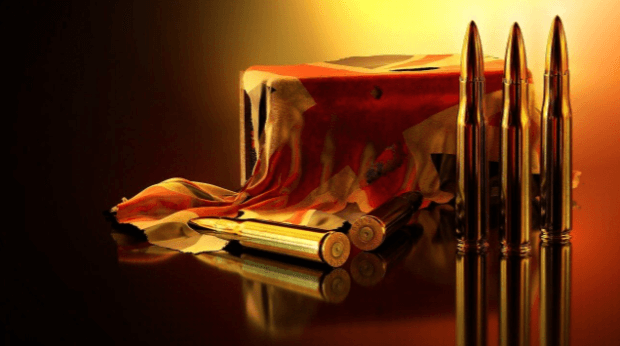 Apart from caliber and design, choosing the right bullet weight is essential to getting the most out of your firearm for any shooting application. A bullet’s weight can heavily influence its accuracy, range and recoil.

However, even long-time shooters may get confused by the science behind a bullet’s weight and how it impacts performance. Fortunately, it is very easy to understand. In this ultimate guide, we will instruct you on how to choose the right bullet weight for the right shooting purpose as well as answer a few of the common questions on the subject.

As already mentioned in the introduction, a bullet’s weight can have a considerable impact on its shooting capabilities. At similar velocities, heavier bullets generally produce greater recoil and hit harder and higher while lighter ones produce less, hit lower and carry less knockout force.

However, performance isn’t the only thing we need to keep in mind when it comes to bullet weight. Different weights have a different feel to them when they are fired. This is why it is important to train with a given cartridge and get used to it. The last thing you want to do is learn of the difference when you are in a life-threatening situation.

Before you can classify a bullet as light or heavy, it is important to know the common weight range for each bullet caliber. For instance, a common weight range for a .308 Winchester hunting round is between 125 to 185 grains. Sure, there might be a few odd balls above or below the stated range but we are going to be assessing our rounds based on the weight classes commonly available.

How to Choose the Best Bullet Weight

For hunting big game, you will need a round that is heavy enough to provide good penetration to puncture through the animal’s thick hide. For this purpose, a medium to heavy round would be best suited for the job. Heavier bullets packing more impact force is a simple matter of physics. At the same speeds, a heavier bullet has more mass and hence carries with it more kinetic energy and momentum.

Since you are likely to be shooting the animal from far range, it is also important that the gun and propellant you are using is able to propel the heavier ammunition at the proper velocity.

Heavier bullets retain their velocities better than lighter bullets downrange and thus, can potentially be more accurate. However, if they are starting off with a slow velocity, the effects of external factors such as gravity and wind would be greater and make them less accurate the further the target is.

For smaller animals, you will probably be better suited to using lighter rounds. Even with an expanding round, the risk is there for the bullet to over-penetrate and cause the poor animal unnecessary pain instead of instantly killing it.

Furthermore, since less powerful guns are normally used for hunting small game, heavier bullets may actually be less accurate for two reasons. First, they will take longer to exit the barrel, resulting in higher recoil. Second, even though they are less susceptible to being blown off course by the wind, the lower velocity in which it is fired tends to reduce accuracy down the range.

Humans don’t have tough skins like most animals do and furthermore, in most self-defense situations, the target tends to be in close range. With these factors assessed, most bullets will tend to over-penetrate instead of quickly downing the assailant. Over-penetration also carries the risk of the bullet continuing on its trajectory after it passes the target and injuring any bystanders. The FBI standard states that a bullet must penetrate at least 12 inches, but not go beyond 18 inches.

Thus, you are most likely well-off choosing medium weight bullets for your caliber. Lower weight will also reduce recoil – extremely vital in a tense situation where you need to quickly aim and shoot the target.

But an expert’s advice would be to test different loads for reliability, penetration, accuracy, and recoil until you find the one that is best for your gun and which you are most comfortable firing. As we will discuss later in this guide, a bullet’s weight is just one variable and thus, should not be used as a sole reference for such critical purposes.

For casual shooting, choose whatever bullet weight you want. The point is here is to have fun and improve your mastery over the weapon you wield. Experiment with different bullet weights to get a better feel of them and how well they go with your gun.

Target shooting requires accuracy. However, when it comes to accuracy, a bullet’s weight is a catch-22. As mentioned earlier, if the bullet is too heavy for the gun, the risk is for it to be less accurate due to higher recoil and lower starting velocity. However, if the bullet is too light, the effects of the wind are more pronounced and they lose their velocity faster.

Hence, there is no hard and fast rule on which bullet weight would do the best job for target shooting. It will largely depend on the type of gun you wield and how powerful it is for its given caliber as well as how much of a bang the bullet’s propellant has in it, plus a multitude of other factors. Trial and error is the only way for you to figure out what would be the best bullet weight for a specific gun.

But, you can also take hints from people who spent a fair deal of time shooting with that particular gun to more easily assess the best load for maximum accuracy.

If you are shooting with a sound suppressor, subsonic ammunition would be optimal. For some gun makes, a bullet’s weight may not be much relevant as they almost shoot ammo at subsonic speeds. However, for the majority of the cases, for quiet shooting, you will need to load your gun with bullets considered heavy for its caliber. To take an example of a 300 AAC Blackout chambered gun, any bullet with 190 grains and or above may be considered as a subsonic round.

First, let us imagine trying to measure bullets in ounces (or grams). It would certainly not be practical. Just picture the scenario below:

Buyer: “How much does this 9mm weigh?”

Buyer: “Right…what’s the heaviest .38 ACP round you got?”

Sound’s highly impractical, right? To add to simplicity, a grain is the unit of mass used for measuring bullet weight. 437.5 grains equal one ounce and thus, makes the weight labels on bullets easier to understand and remember. To illustrate, the above-discussed bullet weights in grain are 115 grain, 143 grain and 130 grain respectively.

Most cartridge packs have the ammo listed on the box but some, such as military surplus ammo, might not have it listed. However, their grain size can easily be discovered through a quick online search of the label.

It is also important to know that the listed grain weight is only for the bullet, not the whole round or its propellant. Fortunately, unless you are powder-loading the rounds yourself, that information isn’t much use to you. If anything, including them in the listed weight could be dangerous as the difference in the propellant and composition could create a misleading understanding of a bullet’s performance.

How Can The Same Caliber Bullets Have Different Grains?

Some of you might be wondering at the mystery of how bullets of the same caliber size can have such diversity when it comes to their weight. There are lots of ways a bullet’s weight can differ.

First is the type of material used to make the bullet. A bullet made mainly of lead is obviously going to weigh more than one composed entirely of copper. The style of the bullet can also influence its weight. A hallow-tip, for instance, can measure fewer grains less than a full-metal jacket. The length of the bullet can also differ, with a longer bullet being noticeably heavier than a shorter one.

Let’s say you are shooting two bullets of the same design and caliber from the same gun. You would naturally assume that the lighter bullet would also carry less recoil. This, in the majority of the cases, holds true but only if they are using the same type of propellant.

This is why it is important to test a round yourself before buying it in bulk as weight alone may sometimes not always help you determine its recoil. Alternatively, you may ask a knowledgeable gun shopkeeper about it before making the purchase.

As you might have assessed from reading the article, a bullet’s weight can have a tremendous effect on its performance. However, it’s just one part of the whole picture. For a given caliber, you will also need to take in other considerations such as style, material, and propellant.

A light bullet composed of tougher metal and fired at a higher velocity is going to have higher penetrating power than a heavier bullet of a softer metal and far slower velocity. For hunting or self-defense, you will also need to take into consideration the style of the bullet. A hallow-tip round designed to expand upon impact would be better suited for such purposes than a solid metal type that only penetrates and carries negligible expansion.

Lastly, the type of gun the bullet is fired from is also important. Usually, the same caliber bullet fired from a handgun will have lower penetration, accuracy, and velocity compared to it being fired from a rifle.

We hope you found the content within the article to be helpful. If you have any thoughts to share, please feel free to do so in the comments below. Be sure to share it with other gun enthusiasts as well who may also find it informative to read. Be sure to also check the extensive list of ammunition choices available at our store by clicking this link.