How to Choose the Right Ammunition for Your Firearm?

How to Choose the Right Ammunition for Your Firearm? 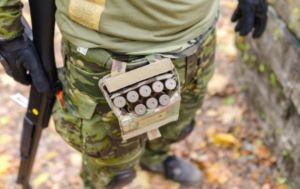 Choosing the correct ammunition for your gun is challenging. There are various considerations to take when shopping for ammunition. You must know what you plan on using the ammunition for, which ammo type is illegal, and which ammunition is less suitable for your weapon. Let’s discuss ways to choose the appropriate ammunition for hunting, target shooting, and self-defense.

Factors to Consider When Choosing Ammunition for Firearms

Stopping power is the ammunition’s ability to deter or stop a threat. Stopping power is often mistaken for knockdown power, but the two have different connotations. The two most important criteria for ammunition terminal performance are penetration and expansion.

Some factors affecting the terminal performance of the ammunition include caliber, composition, constriction, weight, shape, and the bullet’s impact velocity. Full metal jacket ammunition is the right choice for targeted practice with handguns. These bullets are non-deforming and highly penetrative, but they don’t expand in the soft tissue.

Other Criteria for Ammunition Selection

The first thing to consider when choosing ammunition for self-defense is functional reliability. Whether it’s a handgun, shotgun, or carbine, the ammo should cycle with 100% reliability. If you purchase a semi-automatic handgun for home defense or concealed carry, make sure to fire at least 100 rounds to break it in. Some characteristics of self-defense ammo, especially for handguns, are as follows.

Barrel length plays a large part in selecting ammunition for handguns. Jacketed hollow points come with an expansion threshold, the minimum velocity needed for reliable expansion. In shorter barrels, like the ones on a Smith and Wesson revolver, the muzzle velocity is insufficient to meet the expansion threshold of +P expanding and standard pressure bullets.

It leads to unreliable expansion in the soft tissues, thus minimizing the terminal performance of the ammo. To troubleshoot this problem, use sharp-shoulder and flat nose bullets. Unlike round nose bullets, flat-nose bullets are more likely to crush a tissue.

There are three different types of shotgun ammo, but first, let’s discuss what to look for in shotgun ammunition.

As the name suggests, birdshot is used for hunting smaller animals like birds, rabbits, and squirrels. It is also used in sports like skeet-shooting, and some people use it on pests like snakes and lizards. The number of pellets in birdshot depends upon the size of the pellet and the size of the shell. For example, 2.75-inch 12 gauge shell contains 97 pellets for a #2 shot. However, for a #9 shot, there are 715 pellets.

Like shotshells, the number associated with birdshot sizes is opposite of the normal numbers. For example, #2 shots are larger than #9 shots. Some common sizes for birdshot are #7, #7.5, #8 and #9. These sizes are mentioned on the packaging of the shotshells. The average range of the birdshot is 40 yards.

The number of pellets in a cartridge depends upon the size of the pellets and the shell they are loaded in. Because the shots are larger than birdshot, buckshot cartridges have a smaller number of pellets in them. For example, a 12 gauge buckshot has 8 pellets, while a 3-inch shell has 12 pellets. The range of buckshot is somewhere between 30-40 yards.

An Overview of Slugs

Shotguns are designed to shoot multiple projectiles simultaneously. Slugs, on the other hand, function like regular bullets. They are fired from specialized slug barrels that contain rifling grooves. The grooves stabilize a slug’s flight. It means a slug can deliver higher energy than birdshot or buckshot. Slugs can also cover a longer distance.

Steel and lead are two of the most common materials used in making slugs, but other materials are too. For example, rubber slugs are used for less lethal applications. On the flipside, slugs for hunting and gun spots are made of brass and contained in a plastic sabot for a more stable flight.

A slug can travel up to 75 yards because its projectile is similar to the projectile of a bullet. Interestingly, slugs can touch the 100 yards mark with the right firearm. Slugs are used in competition sports, hunting, and more extreme situations that call for breaching doors and vehicles.

Choosing Ammo for Handguns and Rifles

In 2002, the Federal introduced the HST line of the JHP bullets. Initially, these bullets were used only by law enforcement professionals. HST is a brand known for striking the perfect balance between expansion and penetration. In 2015, Federal s started manufacturing ammunition for civilians as well.

Speer Gold Dot is one of the best brands for defensive handgun ammunition. Their bullets are made from the electrochemical bonding process, which eliminates any chance of the core separating from the jacket, thus maintaining the bullet’s integrity.

Hydra Shok is a famous ammunition brand released by Federal in 1988. They were made to meet the FBI’s requirements on terminal wounding.

This brand, “Hydra Shok,” is named after hydrostatic shock. These bullets contain a hollow point jacket and a center post. Sadly, the core is non-bonded, which may compromise the bullet’s integrity.

Critical Defense is one Hornady’s of best ammunition brands for rifles and handguns. These bullets contain a flex-tip insert that provides good expansion, regardless of the penetrated fabric. However, heavy fabrics like denim can plug the nose cavity of a JHP bullet, which makes it perform just like a full metal jacket.

Whether it is a shotgun, a handgun, or a rifle, choosing the correct ammunition is essential. The wrong ammunition can cause severe damage to your gun, and it can be dangerous to the shooter.

Make sure you check out all the considerations and the different brands we have mentioned above before buying a pack of bullets. Detroit Ammo Co. is the place for you for the best ammunition and gear, gun parts, and reloading supplies.

We help gun owners make a well-informed decision about their ammunition and gun parts. We also publish well-researched blogs that keep gun owners updated on the latest gun maintenance techniques, as well as the laws surrounding gun control.

To get in touch, feel free to visit our website today.