The Best Military Assault Rifles in the World

Posted Mar 28th, 2022 in The Best Military Assault Rifles in the World

The Best Military Assault Rifles in the World 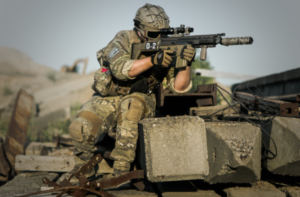 Unlike other firearms, the assault rifle is relatively reliable and easier to use. That is part of why the assault rifle is the weapon of choice for law enforcement professionals and freedom fighters all across the globe. Over time, this firearm has undergone several improvements and modifications, and there are many assault rifle options out there. Each offers something unique, and they all serve a specific purpose. Here are the nine best assault military rifles in the world.

The Belgian Fabrique Nationale developed this modular assault rifle. It was made to meet the firearm requirements issued by the United States Special Operations Command. Moreover, the US special forces also wanted a new firearm available in various calibers. The FN SCAR was released in 2009 and was immediately adopted by the US SODOM. At the moment, this gun is used in more than 20 countries. The FN SCAR is one of the go-to rifles for elite forces, special forces, and law enforcement agencies.

Interestingly, the FN SCAR rifle is one of the few rifles designed from scratch. It wasn’t built over an existing structure or design, unlike other rifles. It is a selective, gas-operated weapon that comes in two baseline models. The first one is the SCAR-Light, and the other is the SCAR-Heavy. The lighter variant has a chamber designed to hold the 5.46×45 mm round. On the flip side, the camber in SCAR-Heavy is designed to hold the 7.62×51 mm ammunition.

This firearm stands out because of the sheer number of configurations it offers to US special forces during combat. Every configuration has the same layout, maintenance procedures, and controls. Apart from ammunition, 90% of the SCAR-Heavy and the SCAR-Light parts are the same. This firearm offers three detachable barrel options, i.e., standard barrel, close-quarter combat barrel, and long barrel.

The SCAR-Light can also use M-16 magazines, AKM magazines, and AK-47 magazines. The SCAR-Heavy, on the other hand, uses 20 round magazines.

Heckler and Koch manufactured this rifle in 1990 to meet the US Delta force requirements. It is an improved and updated version of the M4 carbine, a popular weapon used by the US military. At present, it is used by special forces in over 20 countries. As far as the appearance and feel are concerned, the HK416 resembles the M4-carbine.

The HK416 is available in four models that differ in barrel length. Its models are as follows.

The HK416 rifle is equipped with the Picatinny-type scope rail that enables the gun for various scopes. Moreover, all four sides of the firearm have an accessory rail. The good news is, most accessories of the M4 carbine and the M16 can be used with the HK416, which includes the under-barrel grenade launcher.

The Tavor TAR-21 was launched by the Israeli Military industries back in the early 1990s. Despite its simplicity, this weapon is sturdy and versatile. It was adopted by the Israeli military back in 2006, and within a few years, it became a popular infantry rifle. It is a selective, gas-operated firearm with a bullpup design. Its chamber is designed for the standard NATO 5.56×45 mm round.

This firearm has a modular design, and the barrels are replaceable. By changing the barrel, you can convert it into a versatile firearm that serves multiple purposes. This firearm has spent case ejection ports on either side. The bullpup design gives this gun an edge over others when shooting at close quarters. However, it is just as good for long-range and precision firing. This gun uses M16-type magazines that carry 30 rounds.

Like the last gun, the Tavor TAR-21 has a Picatinny-type rail conducive to various scopes and night vision systems. The red-dot sight is standard. Compared to the M4, this rifle is far more reliable. However, the shorter barrel compromises the accuracy. However, it can carry the US M203 under-barrel 40 mm grenade launcher.

The SIG SG 550  was released in 1986. In 1990, it was adopted by the Swiss army, and it has been a standard-issue military rifle ever since. It is used by elite and special forces globally. To date, 600,000 of these rifles have been produced. It has a standard design, chambered for the standard NATO 5.56×45 mm ammunition. It’s not very obvious, but its operating system is based on the AK 47 model. The SIG SG 550 is one of the finest rifles ever made in terms of build and performance.

Most people use the translucent 20-round magazines to feel the SIG SG 550. However, 5, 10, and 30-round capacities are available if the need arises. For quicker reloading, standard magazines can be clamped together. The sighting equipment on this gun comprises a flip-top front sight and an adjustable rear diopter, which provide this gun with a sight range of 400m. Detachable scope mounts can be easily added to these rifles. It also contains a 4X magnified scope, making this rifle perfect for long-distance shooting.

The SIG SG 550 combines reliability and accuracy features from the M16 and the AK-47. As a result, we get a very comprehensive firearm that is easy to control in long-distance shooting, close-quarter firing, and marksmanship.

Armalite manufactured the M16 in the 1950s to meet the needs of the US army that wanted a new rifle with the intermediate cartridge. Since then, it has been a standard infantry rifle. At the time, the available rifles were annoyingly heavy. Therefore, the M16 was made with light materials that ensure comfort and convenience during combat and training. Instead of steel and wood, the M16 is aluminum and fiberglass. Back in the day, such innovations were unheard of, and therefore, it was called the Space Rifle.

The barrel is in the same line as the buttstock, which minimizes the recoil. This gun functions smoothly during full automatic firing and is easy to control. Unlike other assault rifles, it is also the most accurate rifle. It has a Picatinny-type rail for various scopes, and you can also attach an under-barrel grenade launcher.

Since its inception, the M16 has undergone various improvements. 8 million of these rifles were made by Armalite, and today, the US military uses them in the form of the M16A3. Some people compare the M16 to the AK-47, but in terms of weight, range, and accuracy, the M16 has the edge.

The AK 100 series is a Russian firearm and is a descendant of the classic AK-74M. This gun is similar to the AK-47 in many ways, but it is made of new materials and goes through an improved production technology. The AK 103 is chambered for the 7.62×39 mm round, the same ammunition used in the AK-47 rifles. Compared to the AK-74 M, the AK 103 has superior stopping power and penetration. There is another AK-101, which is chambered for the standard NATO 5.56×45 mm round.

All the rifles within the AK-100 range follow the same operating mechanism. It is a reliable and sturdy firearm capable of handling abuse. Despite low accuracy, the gun never deserts the shooter and operates even in adverse circumstances. Besides being reliable, the AK 103 is simple to use, made of common materials and readily available parts. Moreover, this gun is easy to maintain. This gun is exported to more than 10 countries, and some countries are producing it under license.

Heckler and Koch produced the G36 assault rifle to replace the G3 rifle. Since 1995, the G36 has been a standard infantry rifle for the German armed forces. It is a true success story exported for more than 40 countries. It is chambered for the standard NATO 5.56×45 mm round. Being a descendant of the G3 rifle, they share some common features. Internally, it is a bit similar to the AR-18 assault rifle.

This firearm has a simple layout, and during the trials, it proves to be a superior weapon to the Austrian Steyr AUG. a 30 round box-shaped translucent magazine goes into this rifle. The magazines can be easily clipped together for rapid loading, ensuring rapid loading. This gun can easily welcome a 100 round dual drum magazine if need be.

The sights on this gun are built into the carrying handle. It also contains a 3.5X magnification scope for accurate long-range shooting and a magnification red dot sight for close ranges. It can also carry the HK AG36 40 mm under-barrel grenade launcher. Apart from that, it can also launch barrel-mounted rifle grenades. Although this gun is not as good as the AK-100 series, unlike its other competitors, it offers excellent precision.

This universal army rifle was manufactured in Austria in 1977 and was instantly adopted by the Austrian military. Like most firearms on this list, the Steyr AUG is chambered for the standard NATO 5.56×45 mm ammunition. It is a selective gas-operated gun, but it has an unusual layout. However, it has a modular design, and by changing the barrel, you can use it for various purposes. There are 4 basic types of barrel for the Steyr Aug, which are as follows.

The Steyr AUG is made up of advanced alloys and synthetic materials. Therefore, it is a lightweight, reliable and robust firearm. Its bullpup design has compact dimensions, making it a handy alternative to the big and heavy guns on this list. Unlike other guns, it doesn’t have a fire mode selector. However, the trigger itself is used to select the firing modes. If you pull the trigger halfway, it will produce a single shot. However, pressing the trigger completely will produce a full-auto repeated burst. This gun contains two ejection ports, and one of them is always covered.

It also contains a 1.5X magnification scope, which makes it easier to shoot at a distance of 300m. Furthermore, it comes with backup iron sights to be used in emergencies. The later models don’t have an integral sight, but the Picatinny-type rail can be adjusted for different scopes.

With the standard and carbine barrels, thus guns can launch rifle grenades. Furthermore, with slight modification, this gun can carry the US M203 40 mm under-barrel grenade launcher. The Steyr AUG is exported to over 40 countries and is also being license-manufactured in Australia as the Lithgow F88.

Named after Yisrael Galil, its maker, the Galil was produced in the late 1960s. This gun is based on the Finnish M62 assault rifle model, which is another clone of the iconic Russian AK-47. However, the Galil uses a different cartridge and also offers different features. In the 1970s, the Israelite military adopted the Galil, and it remained their standard infantry rifle until the 1990s.

The Galil is still exported to over 30 countries. Most of its features are those of the AK rifles, but it uses a gas system that is similar to the M62, which minimizes the recoil. However, it is chambered for a standard NATO 5.56×45 mm round. Another version of the same firearm is chambered for the NATO 7.62×51 mm ammunition.

It uses a 35 round magazine, but it can accept a 50 round box magazine. It is equipped with a side-folding aluminum stock, a clone of the FN FAL stock.

It is quite difficult to say which rifle is better than the others. While some rifles are light in weight, some are more accurate. Then some are sturdy, and others are customizable and open to new modifications. If you are interested in knowing more about the best military assault rifles, you have come to the right platform. We are an ecommerce store that offers the most authentic ammunition and gear for all forearms.

Moreover, we publish a periodic blog to educate gun enthusiasts all over the globe. We also have a keen eye on the latest events and developments in the world of firearms and strategic warfare. To check out our products or read our blog, please log on to https://detroitammoco.com/.