Which Gun to Use – Weapons Guide

Guns have always been an important part of American culture and identity, with their ownership protected by the Second Amendment. Not surprisingly, the United States boasts the highest rate of civilian gun ownership per capita, at an estimated 1.2 guns for every person. With so many choices available for civilian use, it can be hard to decide which gun is best for your specific needs, especially when you’re a first-time buyer. This weapons guide will educate you on the different gun types that are available, as well as which gun to use for which purpose.

Types of Guns and Their Uses

Often seen as a weapon of choice for cowboys and outlaws in Hollywood films, the first true revolver was introduced in 1836 by the American inventor, Samuel Colt. At the time, it was the first multi-shot handgun. The design was a success and quickly enjoyed widespread popularity.

Although not as popular as other gun types these days, revolvers are still effective self-defense weapons at short range. The primary reason is its dependability. Revolvers are a simple, foolproof design: when you pull the trigger, it shoots; there is often little or no risk of jamming or failure-to-feed. If a revolver ever fails to fire, one just needs to pull the trigger again; the failed round rotates away from the barrel and a new round takes its place. Many revolvers also boast a high knockout force in their shots, which is a particularly useful feature when defending against highly aggressive and tough targets such as grizzly bears.

Most revolvers are only able to carry five to seven rounds, which acts as a limitation when defending against multiple assailants. Furthermore, unless you are an expert sharpshooter, revolvers are unlikely to be very effective beyond 30 or so yards. Many revolvers also carry relatively high recoil, although some such as the Smith & Wesson Model 60 boast excellent recoil control. Many revolvers also feature no safety mechanism, making them not exactly the most ideal for beginners as a portable self-defense weapon.

Carry a revolver where a potential situation requires you to react quickly and shoot an attacking target, such as when camping in the wilderness. Revolvers shouldn’t be used where the target may be too far away or if there too many targets. In such situations, they are best served as a secondary weapon. 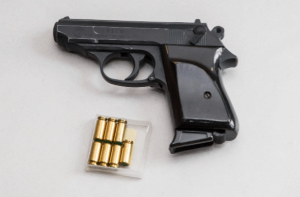 Unlike revolvers, pistols are handguns with a fixed chamber. Cartridges are loaded using a detachable magazine. This allows the pistol to house far more rounds, usually 8 to 24. Although some pistols such as the Kel-Tec PMR-30 boasts a 30-round capacity. Extended magazines can be used to carry even more bullets in most pistols.

Additionally,  most pistols carry a faster rate of fire compared to revolvers, and are far easier to reload. Sure there are some expert shooters that can fire and load a revolver just as fast (or faster) than a pistol, but in the hands of the majority of the people, pistols hold a clear edge in this regard.

Many pistols such as the Ruger LC380 and Smith & Wesson Shield feature very manageable recoil and with usually more safety and high-tech features on offer, pistols make perfect self-defense or secondary weapons for the non-experienced shooter. Most pistols today are semi-automatic. Fully automated types also exist but their selling and ownership are highly restricted.

While exceptions exist, the most notable being the Desert Eagle 50, most pistol feature very little stopping power. This means that against highly aggressive targets in close quarters, they would be way less effective than revolvers. On the other hand, due to their higher accuracy and greater round capacity, they are much better against multiple targets and may be effective at further ranges. Although, few handguns can match the range and firepower of long guns, which should be your main weapon in the above-stated scenario.

For inexperienced or first-time gun owners looking for a portable and concealable self-defense weapon, pistols would be a better choice than revolvers. Although because of the large range of diversity in pistol gun design, it would be best to seek recommendations from a gun expert on which pistol to buy. Alternately, for those desiring more accuracy and larger round capacity, pistols would be better than revolvers. 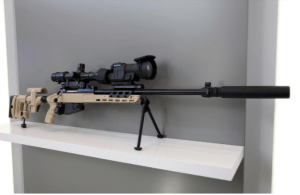 Bolt-action rifles are the simplest form of firearms available today. As the name implies, to fire, it requires the shooter to manually push forward a bolt and pull the trigger. Afterward, the bolt has to be pulled back in order to eject the empty cartridge. Most bolt-action rifles offer tremendous accuracy over the long-range. Fewer moving parts translate to lesser risk of malfunction and thus, their simple mechanism makes them highly reliable and dependable in any situation. However, they do suffer from an incredibly low rate of fire.

Because of this, bolt-actions rifles are most useful for hunting large game, where accuracy and knocking power are the most important criteria and the individual is usually a safe distance away from the target. Most bolt-action rifles hold 4 to 10 bullets in an internal or detachable magazine. Commonly designed bolt-action rifles today include the Remington Model 700 and the Winchester Model 70.

As mentioned already, bolt-action rifles are best used for large to medium game hunting. They are superbly accurate and carry enough punch to penetrate the vital part of a large animal and kill it instantly. Bolt-action rifles can be used in homestead defense but semi-automatics are a far better option due to a far higher firing rate. 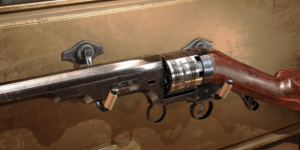 Lever-action rifles are a step-up over bolt-action rifles, offering a faster rate of fire without compromise to accuracy. In these types of rifles, a lever is located around the trigger guard area. When it is pulled, a cartridge loaded into the chamber, ready to fire. Another pull of the lever ejects the empty cartridge and loads a new one. Handedness is not that influential when it comes to lever-action rifles, making them more accessible for some when it comes to shooting.

Compared to their bolt-action counterpart, this design also has some limitations. For one, the lever pulling mechanism makes it harder to fire from a prone position. In addition, most lever-action firearms are also generally fed from a tubular magazine, meaning that the range of ammunition that can be used in them is more limited compared to bolt-actions.

Due to their shorter barrel length and faster rate of shooting, lever-action may be better for hunting big game in some settings such as in woodlands and forests. Most bolt-action rifles have a right-handed bias, so for those who are left-handed and can’t find a suitable bolt-action for hunting, the neutral lever-action is a terrific alternative. 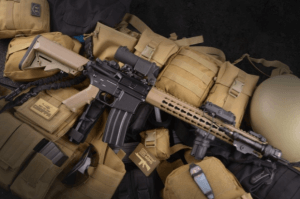 Semi-automatics rifles automatically load cartridges but firing them requires you to press the trigger for each round. Through proper training of your trigger finger and using accessories such as a bump stock, it is possible to shoot 100 per second with a semi-auto. Today, semi-automatic rifles are the most common type of rifles that you might find in the gun market with the AR-15 and the AK-47 the most popular. There is huge diversity in design of semi-autos and their application can range from hunting to home defense to competitive target shooting.

Virtually all semi-automatic rifles carry a very high rate of fire and carry a large magazine capacity of 10 to 50 rounds. But compared to most traditional rifle types, their shots usually don’t pack the same amount of power. The lower muzzle velocity in which a bullet leaves the barrel coupled with their relatively lighter weight also makes semi-automatics less accurate over long ranges compared to bolt or lever-action rifles. However, as with any gun types, there are a few exceptions to this rule, and some such as the Ruger 10/22 are well-known for their lethal accuracy.

A high rate of fire makes them an excellent option for self- and homestead defense from targets at medium range as well as for taking on multiple assailants at once. It also makes it more useful for small game hunting as the target is usually more skittish and can safely be hunted at far closer ranges. Many semi-automatic rifle types tend to be a jack-of-all-trades so if you are just after one rifle for defense and sporting needs, a semi-automatic would be the way to go. 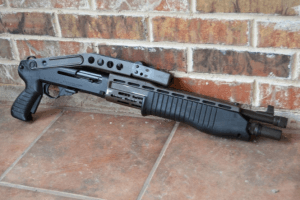 Shotguns are guns that fire small lead or steel pallets (shots) instead of a bullet. The pallets fly out from the barrel in a narrow but expanding cone-shaped trajectory. Because of their large area of effect, shotguns are excellent crowd-control weapons in close quarters. More than one target can be easily downed with a single shot from a shotgun. This also makes them particularly good in some hunting situations such as when hunting waterfowls.

Because the pallets spread out more and lose their energy quickly the further they go, shotguns are obviously ineffective at medium to long ranges. But, apart from shots, shotguns also shoot slug rounds. These are solid metal projectiles designed for big game hunting and help extend the shotgun’s range, making it effective up to 100 yards or so. Most shotguns carry low magazine capacity, usually between 4 to 8 rounds.

It is vital to be aware that most shotguns carry substantial recoil so don’t expect yourself to wield it like Arnold Schwarzenegger in the Terminator movies and casually walk and shoot with it. In fact, the high recoil is what makes shotguns so intimidating for people to use it reliably for self-defense. Apart from recoil, the concussion from the muzzle blast can be extremely palpable. Reliable and fast reloading is also an issue with some shotguns.

Contrary to popular imagination, shotguns are best used outdoors for close-range defense. This is because most people don’t have sufficient training to fire it safely in close-quarter indoor situations. Also be sure to know that, when using defensive shotguns, proper aiming is important as, unlike sporting shotguns, their spread is much narrower but it particularly this that makes them so devastating. Apart from personal and home defense, shotguns also make ideal guns for hunting game at close enough ranges.

Using the right weapon in the right situation can make all the difference, whether it for succeeding in a hunting or saving your own soul. After reading this weapon’s guide, you’ll be able to make a more informed decision on which gun to use for your specific needs.  Of course, apart from choosing the right gun, knowing the right bullet type and caliber are also essential for making the most out of your weapon.  We have extensive range of high-quality ammunitions available at our store, be sure to check them out by following this link.