Macron and Biden to Strengthen Sanctions Against Russia

Posted Mar 22nd, 2022 in Macron and Biden to Strengthen Sanctions Against Russia

Macron and Biden to Strengthen Sanctions Against Russia 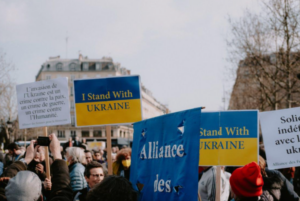 According to the Elysee Palace, Emmanuel Macron, the French president, and American president Joe Biden have agreed to tighten sanctions against Russia. In a recent statement from the Elysee Palace, it was clearly said that the two countries would work hard toward ending the fight in Ukraine and restoring peace in the region. During the conversation between the two presidents, Macron offered his condolences for the death of Brent Renaud, who died while covering the Russian atrocities in Ukraine. However, it is still unclear which sanctions the two presidents spoke of.

The Elysee Palace statement also spoke of the conversation between Emmanuel Macron and Volodymyr Zelensky. The French president expressed his grief over the Russian barbarism in Ukraine and promised that the European Union would provide Ukraine with additional aid in the Versailles summit. A day after Macron spoke with the Russian president, Vladimir Putin, to reach a ceasefire.

According to the White House Press Service Reports, Presidents Biden and Macron discussed the current situation in Ukraine. The press service reports also said that the two presidents reviewed their diplomatic engagements while underscoring their need and commitment towards holding Russia accountable for its crimes in Ukraine. They also shared thoughts over ways to support the Ukrainian people in this time of need.

The United States and the European Union countries have imposed tough sanctions on Russia for being an aggressor state. As a result, Russia’s international isolation is increasing by the minute. While some speculations allude to Russia seeking political, economic, and military help from China, China denies these claims and also expresses its concerns over the issues in Ukraine.

Meanwhile, America has spoken to China about its current relations with Russia. America has told China that all those countries party to Russia in the Ukrainian conflict will be sanctioned along with Russia.

With the US, France, and other EU countries toughening up against Russia, it is too early to predict whether or not Russia will be able to sustain the economic losses from the sanctions strengthened against them by America and the European countries. However, Russia continues to stay offensive against Ukraine, and the increasing number of casualties is a matter of severe concern.

To know more about the current development in the Russia-Ukraine conflict, feel free to visit us online today. At Detroit Arms & Co., we provide our customers with the latest news in the world of Arms, ammunition, and warfare. Our news is well-researched and comes from the most credible sources.