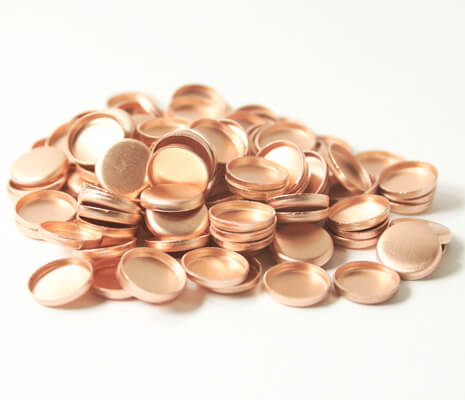 Gas Checks, as we know them today, are small precisely made copper cups that fit on the base of the bullet. Gas checks are used when non-jacketed bullets are used in high pressure cartridges. Gas Checks are a method of enhancing the bullet performance by sealing the base of the bullet against gas blow-by and shielding the lead from the high temperatures generated by the gunpowder. The use of a gas check inhibits the buildup of lead in the barrel and improves accuracy. It has been a generally accepted practice to use a Gas Check on bullets above 1,400 fps.

Gas Checks are most commonly found in the form of a thin cup or disc made of a ductile metal. Copper, zinc, aluminum, and alloys such as brass have been used. A bullet designed to accept a Gas Check has a rebated base shank which permits attachment of the check without altering the maximum diameter of the bullet. The shallow cup-shaped check is mechanically attached to the reduced shank of the bullet by swaging.

High pressures, such as those commonly encountered in maximum loads of magnum revolver cartridges or rifle cartridges, often result in significant problems when coupled with cast or swaged lead bullets. It was long thought that the high temperatures melted the base of the bullet, but this is no longer thought to be the case. Instead, the high pressures allow propellant gas to escape past the bullet, causing gas cutting, which increases lead deposits in the barrel and unbalances the bullet. A Gas Check provides a thin layer of harder but still malleable metal on the base of the bullet that obturates to provide a seal and prevents the propellant gas leakage that causes gas cutting, and help the bullet grip the rifling.