Headspace is one of the most critical measurements in your firearm. The definition of headspace: the distance from the face of the locked bolt to a datum line or shoulder in the chamber that arrests the forward movement of the cartridge. The term originated when all cartridges had protruding rims, so the measure was initially taken only at the head. Now it includes other spans. 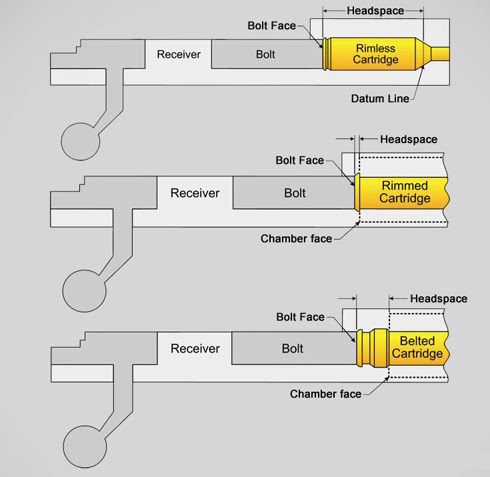 When headspace is set correctly, there is a tiny bit of extra length in the chamber to accommodate the slight variations in cartridge length that occur in even the most rigorously manufactured commercial ammunition.

Why is headspace important?

When the primer ignites the powder in the cartridge, enormous pressure builds up rapidly and makes the case expand against the chamber walls to create a seal. This keeps the hot gases from escaping, except by pushing the bullet out of the case mouth and down the bore. At the same time, the base of the case also expands backward and presses against the bolt or the breech face.

Excessive headspace can lead to bulged cases or even outright failures – cracks, case head separation, and splitting of the case neck. It can also cause light primer strikes, failure to fire, primers popping out of the primer pocket, and of concern to reloaders, shortened case life. A catastrophic case failure can allow hot gas and even bits of brass to escape from the receiver and injure the shooter or bystanders.

Insufficient or excessively tight headspace can be just as dangerous. It can prevent the gun from going into battery, leading to a failure to fire or damage to the case caused by attempting to force the breech closed. Forcing the breech closed can jam the case neck too far forward, causing it to grasp the bullet too tightly, which delays the release of the bullet and leads to excessively high chamber pressures.