Why Brass Ammo Is Better Than Steel-Cased Ammo 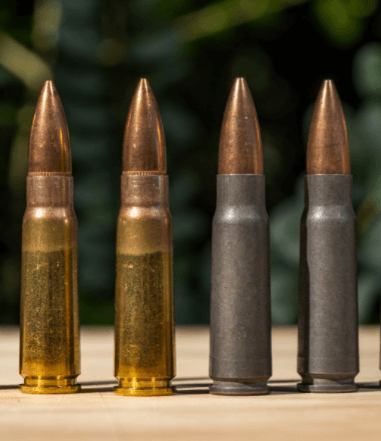 Why Brass Ammo Is Better Than Steel-Cased Ammo

By: Jay Chambers from www.minutemanreview.com

When it comes to cartridges for rifles, there are two types that are causing discussions among gun fans – brass loaded ones and steel loaded ones. Now, it’s not such a surprise – people are debating almost everything nowadays. When the debates are about ammo, it’s important to have a mind of your own and not let yourself be influenced by someone else’s opinion, since guns and ammo are something to be careful with.

Which one is better, brass ammo or steel-cased ammo? In this article, we’re going to set it straight, so you know enough about both types of ammo to make your decision based on that.

Brass is definitely one of the most common types of ammo used for rifles. Especially when it comes to handgun cartridges and modern centerfire rifles, they are pretty much the standard. Now, why is that? Here are some of the pros of these cartridges:

The brass casing can expand when a round is fired and end up filling the chamber of the gun completely. As a result, the chamber is sealed, meaning that the pressure is built more reliably, and that adds to the accuracy of the ammunition.

There are innate physical properties that this ammo owns and that help it expand consistently. Therefore, achieving accuracy is much easier with brass ammo than steel-cased one. This is why brass is often a preferred material, even though it costs more. Brass would be easy to manage with an AR-10, compared to steel-cased ammo, so if you want to shoot accurately with your rifle, you should consider brass.

The production of brass ammo is pretty high, and that’s all thanks to the malleability of the material. Because of that, tooling and manufacturing the ammo is not too pricey, which makes it great for a manufacturer.

Let’s be honest, everyone wants ammo that resists to corrosion, and is more durable and reliable to use. Brass is perfect in that regard since it doesn’t rust or corrode immediately. As a result, it’s much safer and better to use in the chamber of your gun.

Meanwhile, steel-cased ammo tends to corrode quickly, especially if it isn’t coated. That’s not exactly what you would like to use.

Compared to steel, brass is much slicker as a metal. Steel is going to require a lubricating coating to be slick enough, whereas that’s not necessary with brass. With steel, you always need to have a lacquer or polymer finish for it, yet you have nothing to worry about in this regard when it comes to brass ammo. This makes the latter more reliable and more convenient.

Of course, that doesn’t mean that the coating will completely foul up the gun but producing steel-cased ammo just requires extra coating.

Steel-cased ammo has its advantages too, and here are some of them:

The most obvious benefit of steel-cased ammo – which is maybe why so many shooters are considering it – is the fact that it has a low price. Compared to brass, manufacturers can buy steel at lower costs for steel-cased ammo and then sell it for a price below the one of brass.

Steel-cased ammo is one of the easiest ones to recycle, and that is because of it being magnetic. As it has this property, a large rolling shop magnet or draw magnet can be used to empty the cases after people are done shooting on a field. Therefore, recycling them becomes a piece of cake and that makes them convenient.

Another cool thing about steel-cased ammo is the fact that it’s not deforming when you fire the gun. Brass ammo can sometimes have its case’s head torn off, and because of that, it will stay stuck in the action while broken. That prevents the gun from working properly. Steel-cased ammo is at an advantage in this regard.

Even though steel-cased ammo is good in its way and has a few advantages over brass, it is ultimately brass that is victorious out of the two. That’s because steel-cased ammo can corrode very quickly if not coated properly. Basically, it’s very hard, and it can oxidize immediately, which affects the firing process and makes using your gun more of a hassle than an enjoyment.

Steel-cased ammo is also less accurate and if you’re trying to be the best at target shooting or you want to make sure you’ll strike the target when hunting, it’s not the best option.

Brass is way more malleable compared to steel and that makes sure a better chamber seal is created. As a result, less blowback is generated into the receiver and chamber. As mentioned earlier, it can expand and fill the chamber, fitting the walls, and that will make less unburned powder and less gas passing into the gun when you fire it.

Not to mention that brass can be reloaded, whereas you can’t do the same with steel-cased ammo, at least not safely. Again, due to the malleability of brass, it can be reshaped to the original dimensions and thus reloaded. The same cannot be said about its counterpart, steel.

Of course, this may not be a concern for everyone, but it’s an important matter for high-volume shooters or people who don’t want to be throwing money out the window.

If you’re going to buy ammo for your rifle, then you need to know which type of ammo is better and in this situation, it’s brass that takes the medal. It’s more malleable and accurate, and it doesn’t corrode easily. Steel might be cheaper, but the price shows a decrease in quality compared to brass.