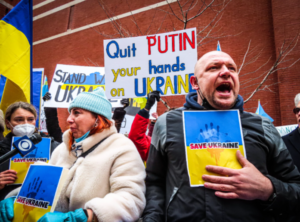 Last Sunday, Russia launched an offensive in Western Ukraine, near the city of Lviv. The Russian military fired upon a military base near the Polish border. Besides killing numerous people, the attack also drew the war close to a NATO country. Russia launched the attack a day after the Kremlin threatened to attack a shipment of weapons coming to Ukraine from the West.

Three weeks into the Russia-Ukraine conflict, the ruthless bombardment has made the beautiful city of Lviv ground zero for the displaced locals. While some have fled for relatively safer parts of the country, others use it as a stopover before escaping to the Polish border.

The Ukrainian administration says Russia’s spree of violence draws closer to Ukraine’s cultural hub. The Russians fired at least 30 missiles at the Yavoriv Military Ground on Sunday. This military ground is situated between Lviv and the Polish border. In the past, Ukrainian forces have conducted joint military exercises with their western allies, including the United States.

According to some local Ukrainian authorities, 35 people were killed during the attacks on Sunday, while more than 130 people were injured. Ukraine’s Minister of Defense Oleksii Reznikov calls the attack a “terrorist attack” on Russia’s part. He also called it an attack on peace and security since it was close to the EU-NATO border.

As some Ukrainian defense officials reported, there have been no reports of any foreign officials among the confirmed casualties. A day before this attack, Russian forces attacked the north-eastern city of Lutsk, situated 70 miles from the Polish border.

While speaking to the media, Ukrainian president Volodymyr Zelensky said it’s only a matter of time before this conflict expands to NATO members. Therefore, the alliance will have to create a no-fly zone in Ukraine. He also told the media he had warned NATO members that a war would start in the absence of sanctions against Russia. In a recent video on Facebook, Zelensky once again urged the NATO members to close the skies, or Russian missiles would land within their territory.

The US security advisor, Jake Sullivan, said that the attacks on Lviv allude to the fact that the war isn’t going according to plan. According to Sullivan, Putin is launching attacks repeatedly because he is frustrated that Russian forces aren’t progressing as well as he had hoped. He also says that Putin is trying to make up for his military’s inefficiency in Ukraine, and therefore, he is expanding the number of targets and lashing out aggressively.

The time has come for NATO countries to respond to Zelensky’s plea seriously, or as the Ukrainian president pointed out, they might be next. If you want more updates about Russia’s escalation in Ukraine, please log on to https://detroitammoco.com/ today. We provide the latest updates from the most credible sources in the media, so feel free to visit us online.