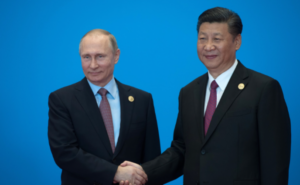 As reported by The New York Times last Sunday, US officials have said that Russia requested economic and military aid from China for the former’s ongoing invasion of Ukraine. CNN, Fox News, and The Washington Post have also confirmed the news. However, according to The Times and The Post, US officials have refused to highlight the nature of weaponry requested by Russia.

The Chinese embassy did not respond when asked about the matter by The Insider. However, while speaking to CNN, the Chinese Spokesperson, Liu Pengyu, said he had never heard about any such request from Russia. Liu Pengyu also told CNN how grieved China is over the current Ukraine situation, and they hope peace will return to the region soon.

After Russia launched a full-scale invasion of Ukraine on February 24, it received crippling sanctions from the west. The UK, the US, and the European Union were the first to impose sanctions against Russia and President Putin, some Russian officials, and a couple of businesses.

On February the 4th, the Russian president Vladimir Putin met the Chinese president Xi Jinping. Later on, the released a statement criticizing the United States. The statement also said the China-Russia friendship. However, according to The Insider, China hasn’t fully sided with Russia over its invasion of Ukraine.

While Ukraine continues to resist Russia’s advances, some economic and military aid from China will make it difficult for Ukraine to hold off the invasion. However, the Ukrainian forces have received military aid from their allies in the west.

Last Saturday, the White House approved weapons worth $2 million to be handed over to the Ukrainian forces. The US extended humanitarian and military assistance to Ukraine in the wake of the Russian invasion, which amounted to $13.6 billion.

While speaking to CNN’s Dana Bash, the National Security advisor Jake Sullivan said the administration is worried about China’s assistance to Russia. He also said there is sufficient reason to believe that China might have known all about Russia’s plans to invade Ukraine. He said the US is watching very closely to see how far China is willing to go in its supposed military and economic support to Russia. According to Sullivan, the United States will not stand by not supporting any country that tries to help Russia recover from its losses due to the imposed sanctions.

Sullivan says the administration has warned China of consequences if they extend any support to Russia or help Russia circumvent the sanctions from the western capitals. The United States also plans to impose sanctions on China if they provide any form of support to Russia, while it continues to launch offensives in Ukraine.

It is still too early to say whether China is willing to support Russia or if these are mere speculations. To find out more about the crises in Ukraine, please log on to https://detroitammoco.com/.