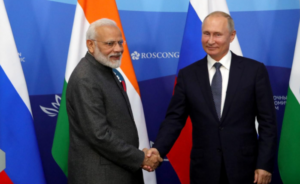 While the western world is strengthening its sanctions on Russia, Russia is trying to tap into new markets. One of the countries taking full advantage of the discounted Russian oil prices is India. The US believes that by purchasing oil from Russia, India isn’t violating any sanctions. However, the US does say that these dealings will have devastating impacts. The US also says that any support for Russia is support for the invasion that is killing innocent people in Ukraine.

After China and the US, India is the third-largest oil consumer in the world. Interestingly, 80% of the oil use by India is imported. Last year, India bought 12 million barrels of oil from Russia, which equates to only 2% of its total oil imports in 2021. Other oil supplies came from the Middle East, Nigeria, and the United States.

During January and February this year, India did not purchase any oil from Russia. However, according to the purchase contracts for March and April, India was about to purchase approximately six million barrels of oil from Russia. While responding to some American reservations, India said its oil imports from Russia will always be a drop in its big bucket of imports, even if it imported a bigger volume of oil from Russia.

The demand for the Russian Ural Crude oil has dropped drastically, following the Russian invasion of Ukraine. There aren’t too many buyers in the market. According to Matt Smith, an analyst at Kpler, it is still difficult to predict the amount of money India is paying. However, he believes that India is getting a discount of almost $30 per barrel.

The Impact of Sanctions

The oil refineries in India are having a hard time financing these discounted purchases because of the sanctions on Russian banks. These sanctions are affecting trade activities on both sides. According to some financial analysts at Bloomberg, the Indian exports to Russia are awaiting payments that equate to $500 million. One of the options India is considering is getting paid in Roubles, rather than Dollars or Pounds.

What’s next for India?

Since February, India’s oil imports from the US have gone up considerably. However, according to some analysts, this is not such a good idea in the long run, as the US is thinking about using its domestically produced oil, rather than importing it from Russia. There are also some suggestions regarding India striking a barter mechanism with Iran, thus allowing Indian oil refineries to purchase oil from Iran. This could have continued, had America not placed sanctions on Iran three years ago. However, a deal between Iran and India is easier said than done. If such dealings were to happen, America would have to jump into the scene to make negotiations over its nuclear program.

If you are interested in knowing more about the Russian-Ukraine conflict and the international actors involved, log on to detroitammoco.com/ today. We are an ecommerce store specializing in guns, gear, and ammunition. We also have a keen eye on the latest news in the world of war and warfare. To find out more, visit our website today.